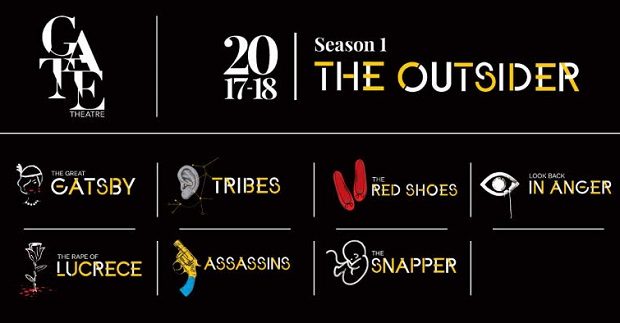 Dublin’s famed Gate Theatre has announced it new season, the first under its new artistic director, Selina Cartmell. The theme for the season is The Outsider, a redefining and reimagining of texts from the Irish, European and American canons, and over the next twelve months a bold and eclectic range of productions will grace the stage, beginning with the Irish premiere of The Great Gatsby, a daring take on F. Scott Fitzgerald‘s Jazz Age tale of decadence. The theatre’s seats will be removed and the chandeliers lowered, transforming the auditorium into Gatsby Mansion. The audience is encouraged to dress in 1920s style, and dancing shoes are mandatory.

Other productions include The Snapper by Roddy Doyle, Look Back in Anger by John Osborne, Assassins by Stephen Sondheim, The Rape of Lucrece by William Shakespeare, and a new version of Hans Christian Anderson’s The Red Shoes. There will also be a new series of post-play shows, Late at the Gate, in which artists and playwrights create a response to the main production. “Today our ambition for the Gate is that it becomes a beacon which exists in the hearts and minds of both artists and audiences.” said Cartmell as she launched the season. “It was Hilton Edwards who said the Gate exists to ‘put at the disposal of our audiences all the riches of the theatre, past, present and future, culled from the theatre of all the world and irrespective of their nationality. A theatre limited only by the limits of our imagination’.”