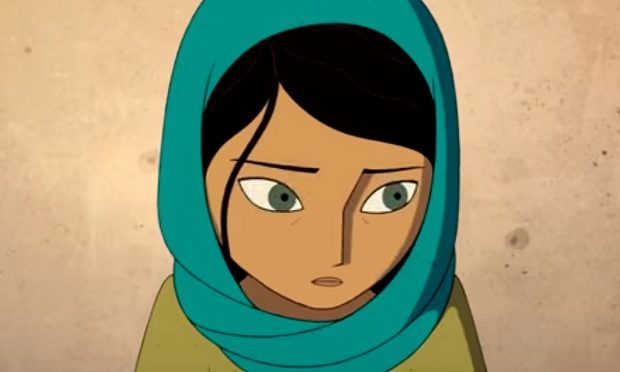 The Breadwinner (image from trailer below)

Following the success of Song of the Sea and The Secret of Kells, Cartoon Saloon, Ireland’s leading animation studio looks set to win another clutch of awards for its upcoming movie, The Breadwinner. Featuring the same beautiful hand-drawing animation style that earned Song of the Sea an Oscar nomination, The Breadwinner looks gorgeous but deals with a difficult subject. Based on the bestseller by Deborah Ellis, The Breadwinner tells the story of a young girl living under the Taliban regime in Kabul, who disguises herself as a boy in order to support her family after her father is imprisoned.

[LEFT: The Breadwinner by Deborah Ellis]

The movie is produced by Angelina Jolie, who for many years has campaigned for children’s rights. “I am proud to be a part of this beautiful film with this timely and very important subject matter,” comments Jolie. “Millions of girls around the world have to grow up before their time, working to provide for their families at a very young age and in difficult circumstances. They have the strength to do what no one should ask little girls to do. I hope this film is able to bring this discussion to a broader audience. As much as it is an important and very meaningful film, it also stands on its own as a great piece of art. Director Nora Twomey and her team have done something very special. They have breathed life into the characters and paid respect to the subject matter and to a country where women often struggle.” The Breadwinner will be released later this year.