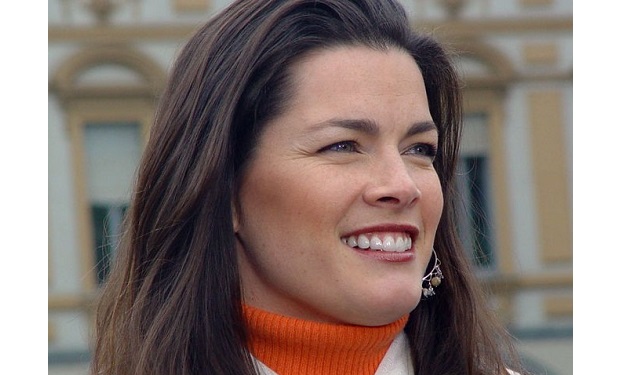 US Olympic medalist figure skater Nancy Kerrigan has made it to the sixth week of Dancing with the Stars with her pro dancing partner Artem. Kerrigan’s not only graceful on the ice and the dance floor but on social media too. When fellow ice skating champ (and DWTS contestant) Kristi Yamaguchi sent good wishes to Nancy before her DWTS debut and wrote “Break a Leg,” the internet accused Kristi of being coy. (Nancy very famously once was hit in the knees.) Nancy replied with a nice note of thanks to assure everyone that all is good between the Olympic athletes.

The other role Kerrigan takes great pride in is being a mother. When her youngest of three, her 8-year-old daughter Nicole came to visit Nancy in Los Angeles while mom was rehearing for Dancing with the Stars, Nancy posted a photo of Nicole climbing a doorframe and put it beside a photo of Nancy doing the same thing as a kid. See below. Dancing with the Stars airs Mondays at 8pm on ABC.

Nicole hanging out in LA. Here for @dancingabc The apple doesn’t fall far from the tree! #family #kids