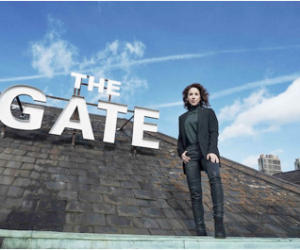 For almost ninety years, Dublin’s Gate Theatre has been an institution in the city. It has been at the forefront of theatrical innovation, introducing Dublin audiences to the offbeat, the experimental and the avant-garde, including a famous association with Samuel Beckett. It also helped to launch the careers of James Mason, Michael Gambon, and Orson Welles. Since its founding in 1928, it has only had a handful of artistic directors, and for more than thirty years Michael Colgan has been at the helm. Colgan recently retired to make way for his replacement, and history has been made; for the first time in its history, the Gate will be run by a woman.

Award-winning director Selina Cartmell‘s tenure as Artistic Director begins today. She has worked in Dublin, London and Paris, and among her productions are King Lear, Macbeth and Titus Andronicus, as well as Catastrophe, Rigoletto, Medea, Spring Awakening, and a much-lauded Sweeney Todd, hailed by the Guardian as “a new dawn in theatre.” Commenting on her appointment as the Gate’s new boss, Cartmell says “I am greatly honored to be given the opportunity to run the Gate. Early in my career it became a welcome artistic home, inspiring and challenging me with an infectious energy that was addictive and came from the top. The Gate is the most inspiring theatre space in Ireland. As the new director, I will be both an enabler and a programmer, working with a dedicated team to provoke artists into running an electrical current through classic and contemporary work to show us what is really there and who we really are today.” The curtain will go up on Cartmell’s first production in July.