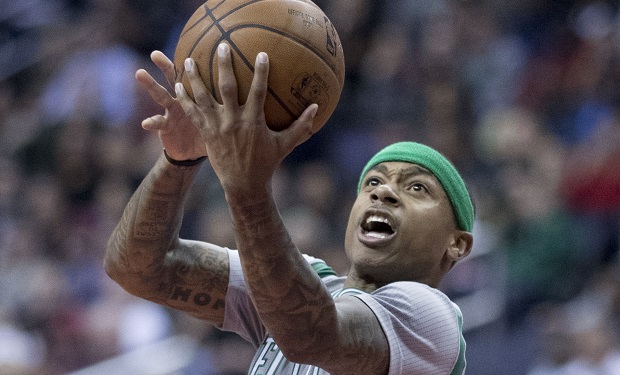 Allen Iverson, Michael Jordan, Kobe Bryant — and most of the other great individual scorers in NBA history — get their share, or more, of shots. Except in his final year, Jordan never averaged less than 20 shots, firing up 27.8 per game in 1986-87. Iverson averaged 31.1 ppg on 25.5 attempts in 2000-01 (he was MVP). Bryant averaged 35.4 ppg on an astonishing 27.2 shots in 2005-06. (One year it was said Dominique Wilkins missed more shots than any of his Hawks teammates took.) It’s far less common to find a big time scorer doing it with crazy efficiency. For example there are only three players in NBA history who have averaged more than 29 ppg while taking fewer than 20 shots a game. There are about to be two more.

Isaiah Thomas and James Harden are on track to join Adrian Dantley, Shaquille O’Neal and Karl Malone as the only players to average 29+ points on less than 20 shots in a season. (The great A.D. did it four times.) Not coincidentally, those three guys are in the Hall of Fame. Thomas, increasingly mentioned as an MVP candidate with the Celtics threatening to win the Eastern Conference, is averaging 29.1 ppg on 19.6 shots. Harden, having a career year too and always in the MVP conversation, is amazingly averaging 29.3 on just 18.9 shots. Both guys, obviously, know how to get to the free throw line — where points accumulate. They have that in common with the other guys on this rarefied list. (And then Harden dishes 11.3 assists per game just to make stats watchers heads spin.)