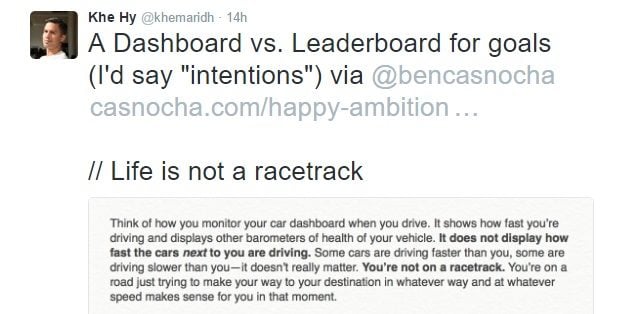 Khe Hy is the author behind RadReads, the influential blog that shows people how to court happiness and stop lying to themselves. Sure there are a lot of places where that advice is commonplace — but the 36-year-old Hy is an example of do as I do, not just as I say. He’s on the journey of “uncomfortable introspection” himself. The smart and successful former Wall Street whiz chucked it all — the career that is, not the money it made him — to start over. Thing is he didn’t know quite what he would start over doing. So he wrote about his fears and inability to find happiness despite (because of?) his success. He sent his writing to friends. They dug it. Now he’s a life coach type guru.

Hy’s coaching is all about “unpacking” one’s desires, to see if when the parts are laid out separately they still make sense. (Spoiler: often they don’t.) We package our desires into mantra-like boxes (I want to make X amount of dollars, etc.) and forget what stirred those desires in the first place. Sometimes it’s not healthy ambition but fear that drives people. Hy’s new vocation, which started as a post-Wall Street avocation, is to help people see what’s what, to separate the fear and ego from their more healthy desires and motivations. Hy sells it well because — as he repeatedly says — he lives it. Lives it still, every day. Who is Khe Hy? He’s always in the process of finding out, just as we all are. He’s just very conscious of it, unlike most of us. The outcome is a work in progress, but for now you can think of him as the “Oprah of the Millennials” if you want. It’s reductive, but that’s what a catchy CNN headline calls him. Check in at RadReads to find out who Khe Hy really is, and check back for who he becomes.