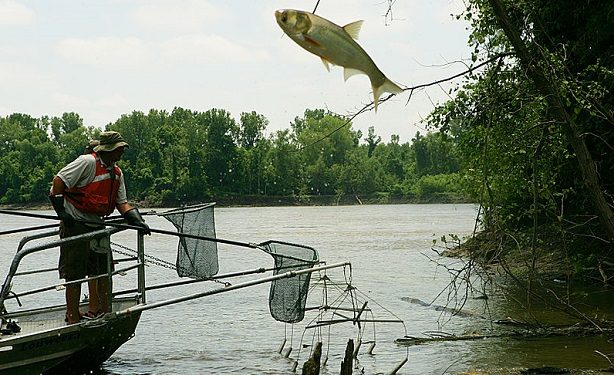 On the Duck Dynasty episode ‘Carpnado,’ the Robinson men go fishing. But this time, it’s not bass they’re looking for. Word is Monroe’s waters have been “invaded” by a certain type of fish, Jumping Asian Carp. They get the name Jumping because when frightened by boats, the large heavy silvery fish jump high out of the water. How high? Some can jump up to 8-10 feet. How heavy? They can grow up to 100 lbs. According to the EPA, Jumping Asian Carp have caused physical harm to fishermen in boats including black eyes, broken bones, cuts from fins, and concussions.

In the US, Jumping Asian Carp are considered an invasive species (feeding on plankton necessary for native larval fish) and injurious (they damage the ecosystem so badly there’s a ban on the importation or transportation of that animal within the U.S. without a permit.) The big question is, if the Robinsons catch Jumping Asian Carp, will they serve it at Willie’s Duck Diner? Duck Dynasty airs Wednesdays at 9pm on A&E.