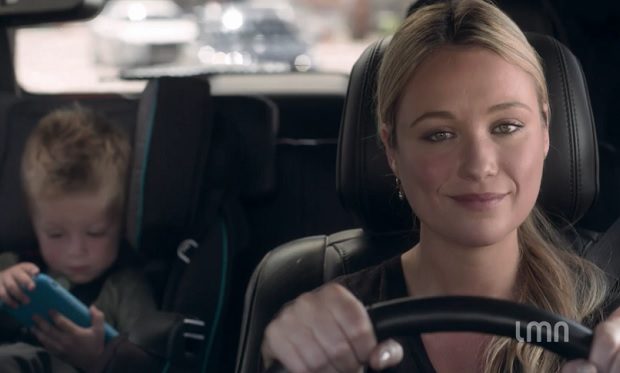 The TV movie Trapped Child is about a young woman named Sandra who’s driving to Los Angeles to visit her husband. She’s driving a Monolith — a fancy, futuristic, “armor suited” car which has been programmed with the directions. In the back seat is her young son Ethan. While Sandra reluctantly follows the car’s directions, they cross the desert at night and hit an animal which makes Sandra swerve. When she steps out of the car to see what happened, the car locks. It actually goes into “vault” mode. The boy is trapped inside the car. Did we mention they’re in the desert, at night? Another apt title for the film is Mommy’s Worst Nightmare.

[Who Is Ted In Lifetime’s ‘Trapped Child’?]

Sandra is portrayed by Katrina Bowden. She’s known for her roles on Public Morals (Fortune), 30 Rock (the sexy blond Cerie), and the Lifetime movie I Killed My BFF (Shane Riley), among others. Bowden is also recognized for her role as Natalie in Scary Movie 5. Trapped Child premieres on LMN on Sunday, December 4 at 8pm.