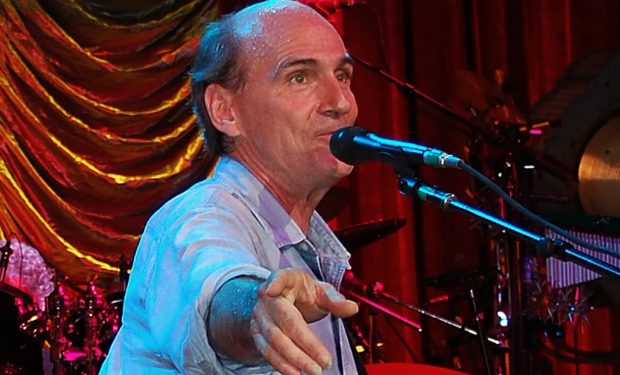 At the 33rd annual Kennedy Center Honors celebration in 2010, American singers Mavis Staples and James Taylor performed a medley of “Let It Be” and “Hey Jude” to honor former Beatle Sir Paul McCartney. Now Staples and Taylor are being honored individually at the 39th annual event in Washington, D.C. (The other honorees are Argentine pianist Martha Argerich, the rock band Eagles, and actor Al Pacino.)

James Taylor enjoys the evening with his wife, Caroline “Kim” Smedvig. They met in the mid-1990s while Smedvig was working as the director of PR and marketing for the Boston Symphony Orchestra. Taylor was playing with John Williams and the Boston Pops at the time. In 2001, the couple married and had twin sons, Rufus and Henry. Taylor says the song “You and I Again” (on his 2015 album, Before This World) “is about that sense that in the first six months that I knew Kim, it felt as though I were encountering her from a former life. As if we had been maybe siblings in a prior existence, or parent and child, or maybe we’d been lovers. But there was piece after piece after piece that we were so in sync. It was so remarkable that I wrote this song about finding someone on the other side of death, in this lifetime.” Taylor was married twice before, to Carly Simon and then Kathryn Walker. The Kennedy Center Honors taped celebration will air on Tuesday, December 27 at 9pm on CBS.