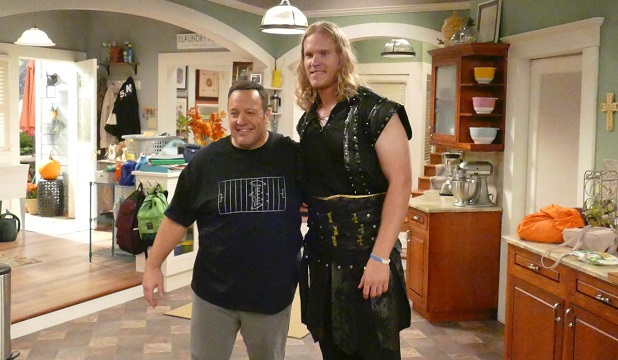 In the Kevin Can Wait episode ‘Hallow-We-Ain’t-Home,’ Kevin (Kevin James) and his wife Donna (Erinn Hayes) get tricked by their neighbors and end up pretending not to be home to avoid giving out candy. Meanwhile, their daughter Kendra’s fiance Chale (who’s dressed like a strip of bacon) has a run-in with a large man dressed as a Viking.

The Viking is portrayed by Noah Syndergaard. Last time he was on TV was at the 2015 World Series as himself, a 24-year-old pitcher for the New York Mets who made his MLB debut that May. Story goes that Snydergaard got the nickname Thor after he posted a photo of himself weight-lifting while dressed up as Thor. (He can squat 455 pounds, btw.) Kevin Can Wait airs Mondays at 8pm on CBS.

Made some new friends today. Thanks @snytv