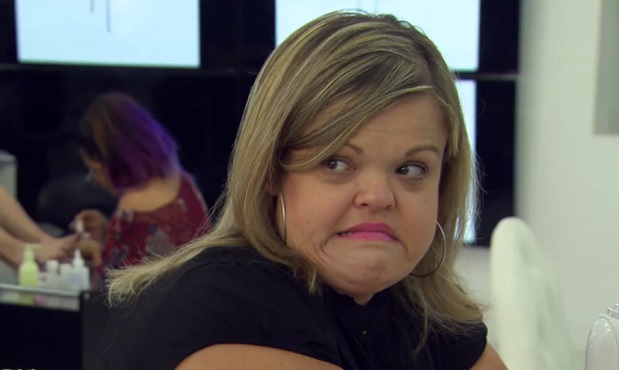 On the Little Women: LA episode ‘Plastic Problems,’ Jasmine Arteaga Sorge confronts Christy McGinity Gibel about meddling in Briana Renee‘s life. (Briana has given her husband Matt a second chance after he allegedly sexted with transgender model Plastic.) Christy is friends with Plastic. While getting their nails down, Plastic tells Christy that Matt has texted her again. Plastic says “he wants to meet me before I get my surgery.” Frustrated that none of the Little Women believe a word she says, Christy tries to prove herself but her plan backfires in a major way. Or as Lifetime says, “all hell breaks loose.”

Christy shows up at Tonya’s photo shoot with Plastic. Tonya yells at Plastic, “We don’t want to hear what you have to say. Bye!” Plastic then threatens Tonya with: “You want to get hit in the face with an Italian leather bag, bitch?” Little Women: LA airs Wednesdays at 9pm on Lifetime.