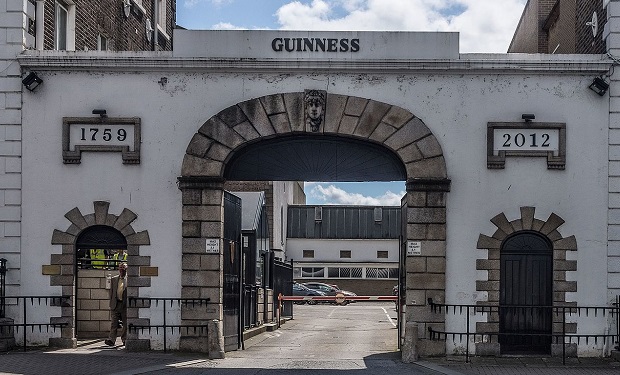 Guinness barley, by barge to here (photo by William Murphy via Wikimedia Commons)

While Guinness is synonymous with Dublin, one of its essential ingredients, malting barley, is grown in County Carlow. Until 1960 this barley was transported to the brewery at St. James’s Gate by barge along the River Barrow and the Grand Canal (a waterway famously celebrated by Irish poet Patrick Kavanagh). Barge transport in Ireland has declined, but one Irish artist is determined to use a barge (of sorts) to explore the vanished connection between Dublin and Carlow. Fergal McCarthy lives beside the filled-in harbor at the Guinness factory. Harvesting over 700 plastic bottles and several forklift palettes from the Grand Canal, McCarthy has fashioned a raft to repeat the Guinness barges’ journey in reverse.

McCarthy’s project, Take Me to the River, involves rowing for eight days along Ireland’s waterways to install his raft as the centerpiece of an exhibition at the Link Gallery in Carlow as part of this summer’s Visual Arts Program. This is not McCarthy’s first foray into the water. The artist has a fascination with rivers and humans’ interaction with them. Following Ireland’s economic collapse in 2008, he created Liffeytown: an installation of Monopoly-style red and green houses in the River Liffey in Dublin. This was followed by No Man’s Land, a man-made desert island moored in the middle of the river. A lifelong obsession with John Cheever’s “The Swimmer“ became the focus of a project in which McCarthy swam through Dublin using public and private bodies of water. Take Me to the River runs July 9 to October 16.