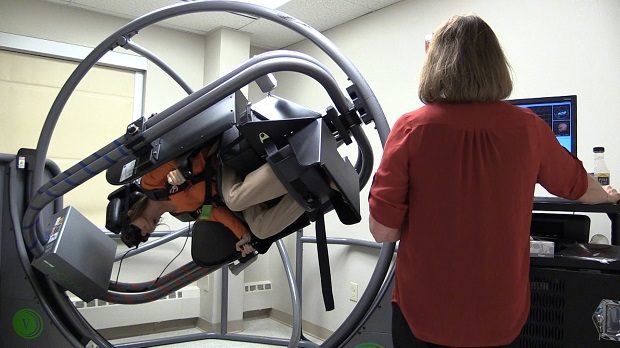 An Epley Chair in use at Saint Louis University (YouTube)

Mark Cuban published an in-depth and astonishing post on his Blogmaverick platform about his desperate experience with vertigo. Cuban had experienced vertigo ten years ago, but in May 2015 something hit his head in a new way — and none of the head exercises that worked before had any effect. MRIs showed nothing wrong. Cuban was prescribed Klonopin when stress was thought to be causing his head troubles. But he “got off those meds quickly,” he writes.

Then Valium did the trick. But Cuban identified a serious problem there. “Taking 9mg of Valium a day was no way to go through life,” he writes. Finally he finds a doctor who treats his dizziness with a controlled video treatment that helped re-establish his brain’s connection with his otolith — the problem spot. And boom — it worked. But it requires an Epley chair, of which there are only about 20 in the country. None in Dallas where Cuban lives. So Cuban created a facsimile of the Epley chair experience with his Samsung VR goggles, a product he purchased to learn more — as an investor — about Virtual Reality. It worked, so Cuban and his doctor (Dr. Mango) are now patenting the process. He’s hoping it can have the “same impact on others that it had on me.”