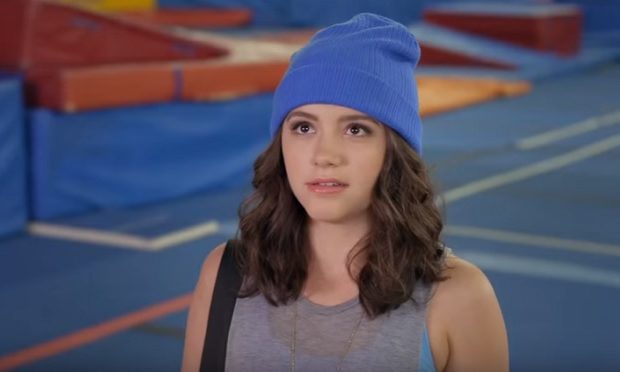 The Lifetime movie Full Out is based on the true story of elite gymnast Ariana Berlin. While training for the Olympics at the age of 14, Ariana was involved in a debilitating car accident. Five days later, when she wakes from a coma, the doctors tell her “gymnastics is pretty much off the table.” She was in the hospital for close to a month. But with the encouragement of a young physical therapist — who introduces Ariana to the competitive world of hip-hop dance — Ariana recovers. When Ariana gets a call from UCLA women’s gymnastics coach Valorie Kondos Field (Jennifer Beals), she goes.

Ariana is portrayed by Ana Golja. The 20-year-old Canadian-born actress is known for her role as Zoe Rivas on Degrassi: Next Class, Degrassi TV, Degrassi: Don’t Look Back, Degrassi: The Next Generation, and Degrassi: Minis. Golja is also recognized for her roles on What’s Up Warthogs! (Laney), Clue (Liz), and Connor Undercover (Lily). Fun fact: The real Ariana is Ana Golja’s stunt double in Full Out which premieres on Lifetime on June 25 at 10pm.