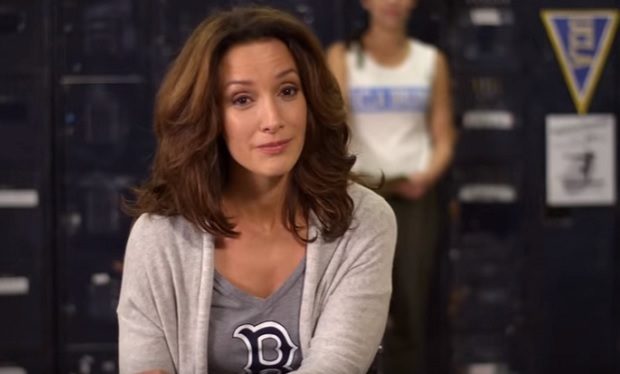 The TV movie Full Out is based on the true story of elite gymnast Ariana Berlin (who is portrayed by Ana Golja). While training for the Olympics at the age of 14, Ariana was involved in a debilitating car accident. The doctors told her “gymnastics is pretty much off the table.” But Ariana found inspiration in one of her physical therapists who introduced Ariana to the world of hip-hop dance. When Ariana recovers, she’s invited to meet with UCLA women’s gymnastics coach Valorie Kondos Field.

Coach Field is portrayed by Jennifer Beals. She’s known for her roles in Proof (Dr. Carolyn Tyler), The Mob Doctor (Celeste LaPree), Lie to Me (Zoe Landau), and The L Word (Bette Porter), among others. Beals is also recognized for her roles in the films Roger Dodger (Sophie), The Last Days of Disco with Chloe Sevigny and Kate Beckinsale (Nina), Mrs. Parker and the Vicious Circle (Gertrude Benchley), and Flashdance (Alex Owens). Fun fact about Full Out: The real Ariana is Ana Golja’s stunt double. Full Out premieres on Lifetime on June 25 at 10pm.