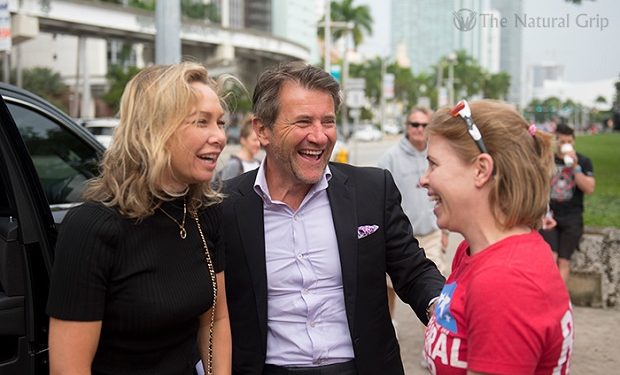 Kym and Robert with Ashley at 2016 Wodapalooza, photo: Jason Morrison, The Natural Grip

Ashley Drake is a Captain in the US Army Corps of Engineers and the inventor of The Natural Grip, an alternative to traditional weightlifting gloves or wraps. The Natural Grip is made of thin strips of cotton tape that can be custom fit to one’s hands based on ring finger size. They can be worn for weightlifting, CrossFit training, and gymnastics. Drake pitched her business on Shark Tank in Season 6 and made a deal with Robert Herjavec. When Herjavec tried the product on the show, and did a pull-up, he proclaimed himself Sporty Shark.

[Left: The Natural Grip Workout Grips are available on Amazon]

The Natural Grip Shark Tank episode ran before Herjavec competed on Dancing with the Stars, where he met his future fiance, professional dancer Kym Johnson. To help Drake promote The Natural Grip at Wodapalooza in Miami, Herjavec made an appearance at the event with Kym in tow. Two months later, they got engaged. Herjavec will visit Drake again on Beyond the Tank which airs Fridays at 8pm on ABC.