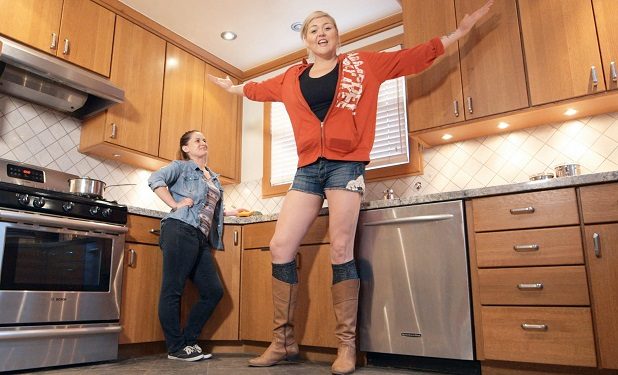 In the Season 2 premiere episode of My Giant Life, “The Year of Lindsay,” while newlyweds Haleigh (6’7″) and Bryan (5’8”) struggle in their studio apartment, and Katja (6’9”) and her wife Julie (5’2”) start looking for a sperm donor, Lindsay pursues her acting career in Los Angeles.

Lindsay Kay Hayward can be seen in two feature films, The Internship Games and R100. She has the lead role in R100, which earned her the Guinness World Record for Tallest Actress in a Leading Role. The previous record was shared by 6’0” Margaux Hemingway, Sigourney Weaver, Geena Davis and Brigitte Nielsen. Note to Hollywood: Lindsay would love to play Wonder Woman, Supergirl and Thor. She’s also interested in appearing on Game of Thrones. My Giant Life airs Tuesdays at 10pm on TLC.