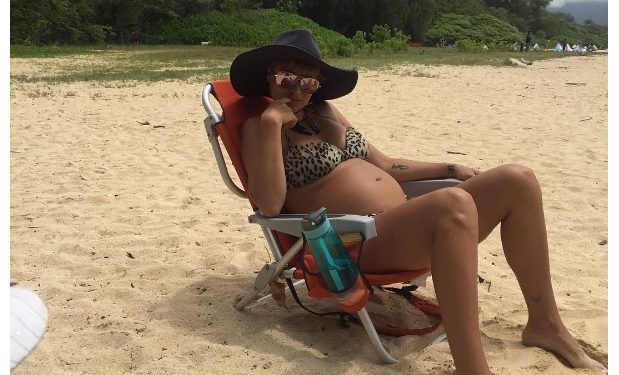 One year after winning America’s Next Top Model (All Star Cycle 17), 5’9” tall blond Lisa D’Amato married entrepreneur Adam Friedman at the magical Hollywood Castle in the Hollywood Hills. (A number of friends in the biz attended, as did former madam Heidi Fleiss.) In 2013, Lisa and Adam had a baby boy named Dax. Three years later, the couple is on Marriage Boot Camp: Reality Stars. Lisa says Adam always “throws the D word at me.” (Divorce.) Lisa also says Adam doesn’t like to be on camera, but when he is, he’s not afraid to push his wife around.

Either Lisa and Adam are just pretending to be close to divorce or they’re going to have an amazing breakthrough at Marriage Boot Camp. Because according to their Instagram accounts, they are happily pregnant with their second child (another boy!). On June 2, Adam posted a photo of a very pregnant Lisa (see above) on the beach of Kahului, Hawaii and a video of him playing with her “preggos jugs” (see below). Marriage Boot Camp: Reality Stars airs Fridays at 9pm on WEtv.