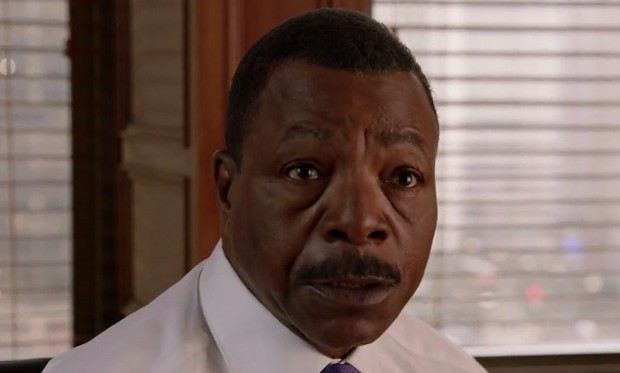 In the Chicago P.D. episode “Justice,” the life of Officer Kim Burgess (Marina Squerciati) gets turned upside down when she chases after a perp who she thinks opened fire on her patrol car, leaving her partner Sean Roman (Brian Geraghty) wounded. Problem is, when she shoots the presumed suspect no gun is found at the scene. And the shoot suspect turns out to be a 17-year-old honor student, who was wearing a hood. ASA Peter Stone (Philip Winchester) and State Attorney Mark Jefferies get involved in the case.

State Attorney Mark Jefferies is Carl Weathers. The former NFL football player (Oakland Raiders) is known for his roles in the Rocky movies (Apollo), and for his recurring roles on Arrested Development (as himself), Brothers (Coach Trainor), In the Heat of the Night (Chief Hampton Forbes), Street Justice (Adam Beaudreaux) and Tour of Duty (Col. Brewster), among others. Chicago P.D. airs Wednesdays at 10pm on NBC.