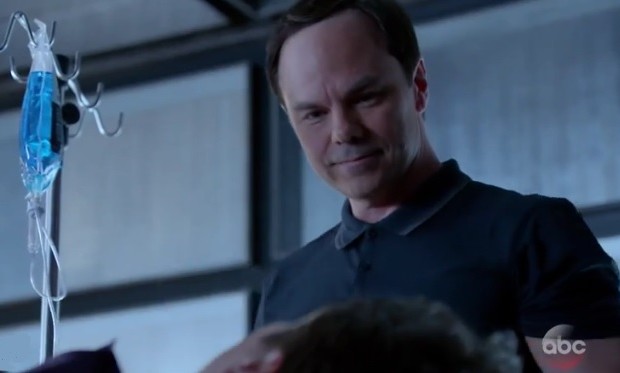 In the season finale episode of Castle, ‘Crossfire’, Castle (Nathan Fillion) and Beckett (Stana Katic) believe they’re ready to take on LokSat. But an unforeseen twist puts their case and their lives in jeopardy. Yet again, Castle awakens to discover himself in another strange predicament. He’s being held captive by a man who goes by the name the government gave him, Mr. Flynn. Flynn is determined to have Castle reveal the names of those who know about LokSat.

Mr. Flynn is portrayed by Jed Rees. He’s known for his roles on Pretty Little Liars (Hector Lime), Masters of Sex (Dr. Crane), The Chris Isaak Show (Anson Drubner), The X-Files (Lucas Menand), and Hawkeye (Peevey) with Lynda Carter, among others. You can see him on the big screen in Deadpool (Recruiter) and in the upcoming crime/thriller Mena with Tom Cruise. Fun fact about Rees: He got his big acting break on a 1991 episode of 21 Jump Street. Castle airs Mondays at 10pm on ABC.