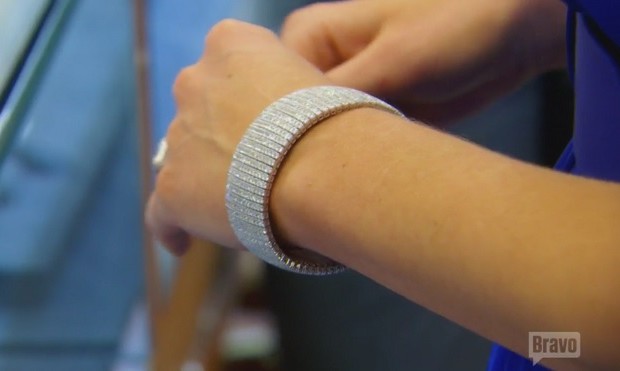 On The Real Housewives of Dallas episode “Guess Who’s Coming to Dinner?” while LeeAnne Locken accuses friend Tiffany Hendra of not having her back, Stephanie Hollman is sitting pretty in jewels. For their wedding anniversary, Stephanie’s husband Travis takes her to the jewelry store where owner Denis de Boulle has pulled a number of diamond bracelets for Stephanie to chose from. Stephanie admits: “Travis will buy me anything if he think it’ll make me happy.”

Stephanie chooses the most expensive bracelet shown: a 23 carat white diamond bracelet set in white 18k gold ($75,000). Travis didn’t expect her to choose the most expensive one, but he buys it nonetheless. The big mistake he makes at the jewelry store is allowing de Boulle to let Stephanie try on his 20 carat diamond ring “for your tenth anniversary.” Presumably it would make her happy, so if what she says is true…yikes. It costs $2.5 million. The Real Housewives of Dallas airs Mondays at 10pm on Bravo.