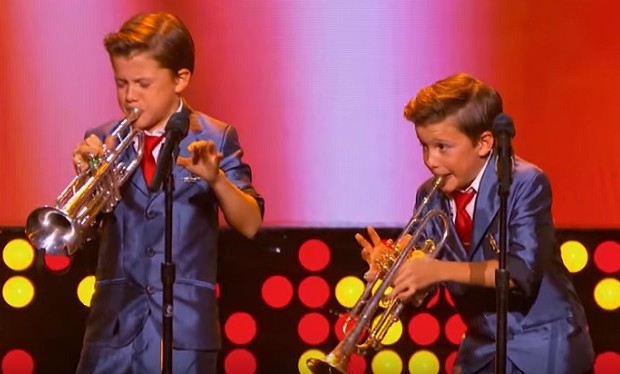 The New Orleans-style Dixieland band called Pelican 212 is led by 11-year-old twin brothers Max and Kolbe Rees. On Little Big Shots, wearing bespoke blue suits, the boys perform the iconic song, “When the Saints Go Marching In.” Not only do they blow their trumpets with maturity beyond their years, Max and Kolbe sing too! The boys are natural performers — as is the rest of the band/family. Max and Kolbe are two of ten children in this harmonious family from Pensacola! Their mother Linda Rees says her husband John gave the twins trumpets when they were two. “I thought he was insane,” he said.

[Little Big Shots Season 2 kicks off with the  awesome 12-year-old singer ELHA — she does Beyonce too!]

The eldest Rees performer is Katie on guitar. Then there’s Angelle on piano and drums, Marie who plays trombone and bass, Giovanni on trumpet, and Mollie on trumpet and drums. Little Big Shots airs at 7pm and 8pm on NBC.