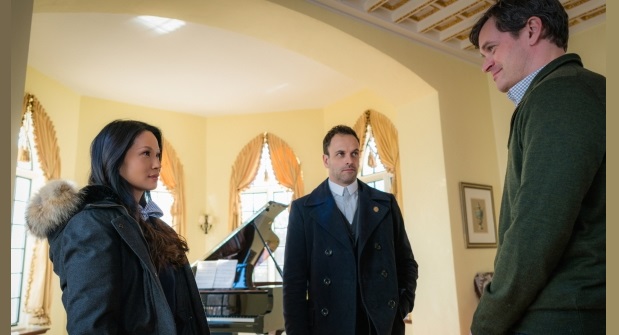 The Elementary episode “Hounded” is based on the Sir Arthur Conan Doyle classic crime novel “The Hound of the Baskervilles.” On Elementary, Sherlock Holmes (Jonny Lee Miller) and Joan Watson (Lucy Liu) investigate the strange death of Henry Baskerville’s brother who was reportedly chased to death by a diabolical supernatural animal.

Henry Baskerville is portrayed by Tom Everett Scott. He’s best known for his roles on Reign (William), Beauty and the Beast (Sam Landon), Southland (Detective Russell Clarke), GCB (Andrew Remington), Sons of Anarchy (Rosen), Law & Order (Governor Donald Shalvoy), ER (Eric Wyczenski), and Grace Under Fire (Matthew), among others. Scott is also recognized for his roles in the films That Thing You Do!, Because I Said So, and An American Werewolf in Paris. Elementary airs Thursdays at 10pom on CBS.