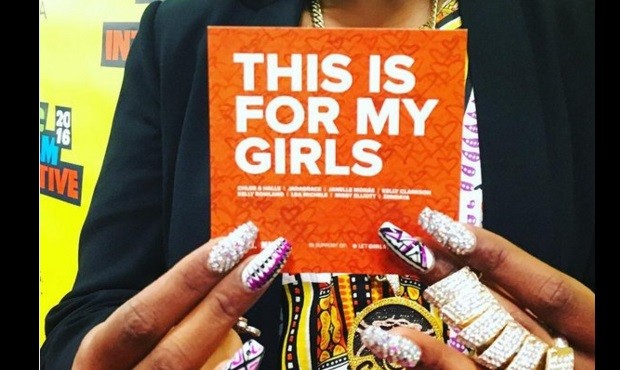 'This Is For My Girls (image: Missy Elliot, Twitter)

Songwriter Diane Warren and First Lady Michelle Obama dropped “This Is For My Girls” in Austin at SWSX. But the road to the moment was, let’s just say, many-splendored. Warren has mentioned the famous recording of “We Are The World” as an influence, but this time it’s all female voices on the anthem — giving its message of female empowerment a real “do as I do” and less “do as I say” feel. Because the record is full of women showing, not just telling, girls and the rest of the world just what’s possible. And wow it’s a lot of powerful female voices doing the showing.

Here’s who you’ll hear when you drop the needle on (okay, click on) “This Is For My Girls“:

The ensemble single is produced by Makers, the “women’s leadership platform.” Proceeds benefit the #letGirlsLearn initiative that Michelle Obama established to help bring change for the estimated 62 million girls around the world without access to education.

“This Is For My Girls” on #iTunes now https://t.co/PyTSDokHW6 got my support! pic.twitter.com/g7Z9alLkeA