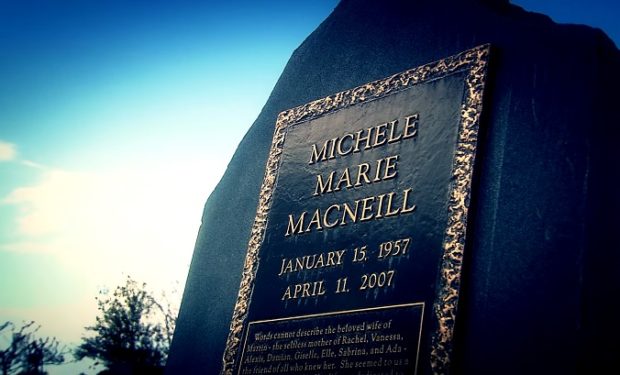 Mormon mother of eight Michele MacNeill was found dead in her bathtub in 2007. Her husband, physician Martin MacNeill, was convicted of her murder — drugging her and living her to die in the tub. He was also convicted of fraud — for stealing the identity of his 16-year-old daughter to erase the debt of his mistress Gypsy Willis. MacNeill was also accused of sexually abusing his adult daughter Alexis one month after Michele’s death.

Three years after Michele’s death, in January 2010, Michele and Martin’s only son Damian MacNeill, 24, committed suicide (overdosing on prescription drugs). At the time, he was studying at New York University Law School. In 2009, the Utah County Attorney’s Office sent an email to NYU that stated: “To be perfectly clear, Damian MacNeill is not a suspect in the death of his mother. However, at the insistence of MacNeill family members, we entered ‘damianmacneill’ into Google and were shocked at the postings found on his Twitter site, which suggests a propensity to commit indiscriminate violent crimes. … The comments by Damian MacNeill are very troubling wherein he speaks of killing others and the joy of such.” Dateline NBC airs Fridays at 10pm.