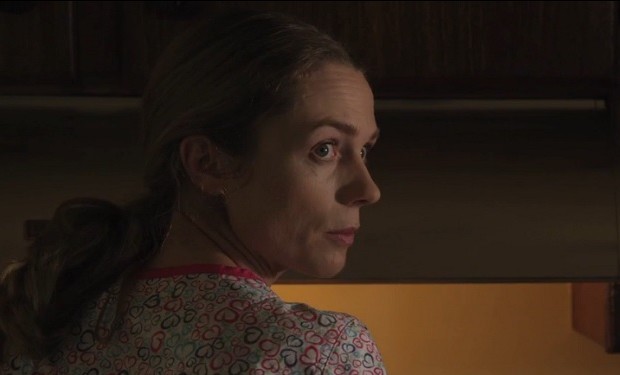 On the Better Call Saul episode “Amarillo,” while Jimmy (Bob Odenkirk) “exhibits new heights of showmanship” for his client outreach efforts, Mike (Jonathan Banks) visits his granddaughter Kaylee. Before leaving, Mike senses something is up with his daughter-in-law Stacey. She says she doesn’t want him to worry. But when Stacey tells Mike she’s been hearing gun shots at night, he might not show it — but Mike worries.

Stacey is portrayed by Kerry Condon. The Irish actress is best known for her roles on Believe (Dr. Zoe Boyle), The Walking Dead (Clara), HBO’s Luck (Rosie), and the HBO/BBC series Rome

(Octavia of the Julii). Fun fact: She’s the youngest actress ever to play Ophelia in a Royal Shakespeare Company production of Hamlet. She was 18. Better Call Saul airs Mondays at 10pm on AMC.