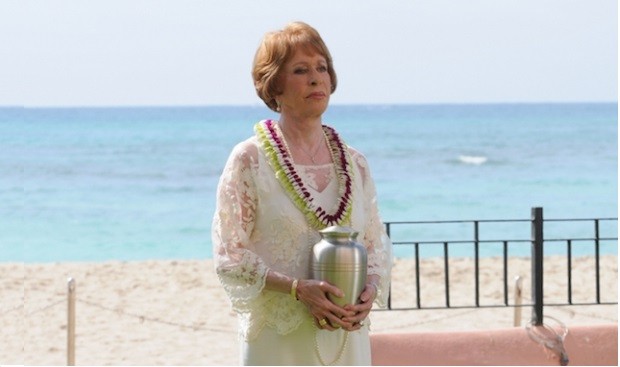 On the Hawaii Five-0 episode “Ua Ola Loko I Ke Aloha (Love Gives Life Within),” while Five-0 investigates the disappearance of unstable Japanese World War II bombs that were left on the island, Steve McGarrett (Alex O’Loughlin) gets a visit from his Aunt Deb. She’s on the island of Oahu “on a very personal mission.” This isn’t the first time Hawaii Five-0 fans have met Aunt Deb. She last appeared on the show in 2014 when she got married.

Aunt Deb is portrayed by the legendary Carol Burnett. The 82-year-old comedienne/singer is best known for her variety show The Carol Burnett Show

. During its 11 year run, it earned 22 Emmy Awards. The Carol Burnett Show had spinoff shows including Mama’s Family (Burnett played Eunice Higgins) and Carol & Company. Burnett appeared on other people’s shows, too. She had recurring roles on Mad About You (Theresa Stemple), and more recently on Glee (Doris Sylvester), and Hot in Cleveland (Penny). Hawaii Five-0 airs Fridays at 9pm on CBS.