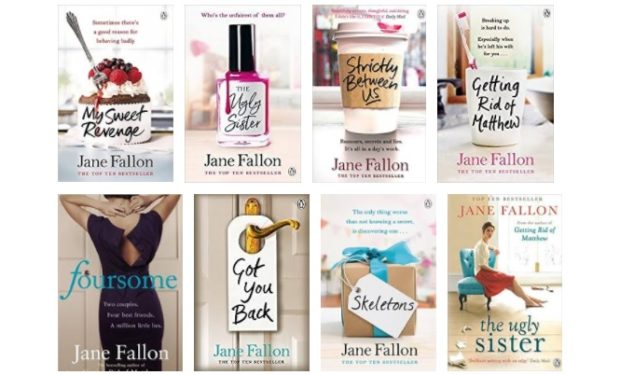 A collection of Jane Fallon books

English comedian, writer, actor, producer Ricky Gervais met his partner of more than 30 years Jane Fallon while at college — at University College London in 1982. Two years later they moved in together. Gervais and Fallon say they don’t intend to get married. “I don’t think there’s any point to us getting married,” Gervais once told David Letterman. Before adding jokingly: “We don’t want any more toasters, we never want our families to meet, that would be terrible.”

Fallon is a former TV producer (This Life, Teachers, 20 Things to Do Before You’re 30) who is now a successful novelist. She is the author of five best-selling “chick lit” novels including Skeletons, Getting Rid of Matthew, Got You Back, Foursome, and The Ugly Sister

. Her sixth book, Strictly Between Us, will be released just four days (January 14, 2016) after Gervais’ big night hosting the Golden Globes (January 10, 8pm, NBC). Good Housekeeping calls Strictly Between Us “A delicious edgy read full of double-dealings and divided loyalites…that’s why she’s still the queen of dark chick-lit.”