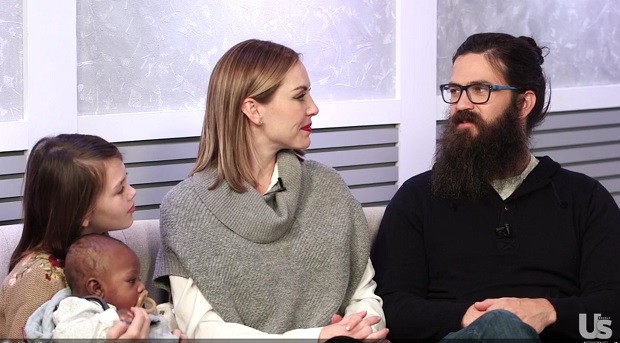 Jess and Jeb and family talking to US Weekly

In the Jep & Jessica: Growing The Dynasty episode “The Circumbration,” Jep and Jessica Robertson of Duck Dynasty are seen with their newly adopted son, a four-month-old boy named Jules Augustus aka Gus. Jules Augustus is African American, notable perhaps only because the patriarch of Duck Dynasty, Phil Robertson, is infamous for making racist comments including that Blacks were “happy” before the civil rights movement. And because reality TV shows are built on drama and conflict — is little Gus about to enter life at the center of some?

After 13 years of marriage and having four children – Lily, 13, Merritt, 11, Priscilla, 9, and River, 7 — Jessica said she wasn’t physically able to have another child. While they admit that adoption isn’t an easy process, they would consider adopting again. “You never know,” Jep teased while his wife added, “we would be open.” Jep & Jessica: Growing the Dynasty airs Wednesdays at 10pm and 10:30pm on A&E.