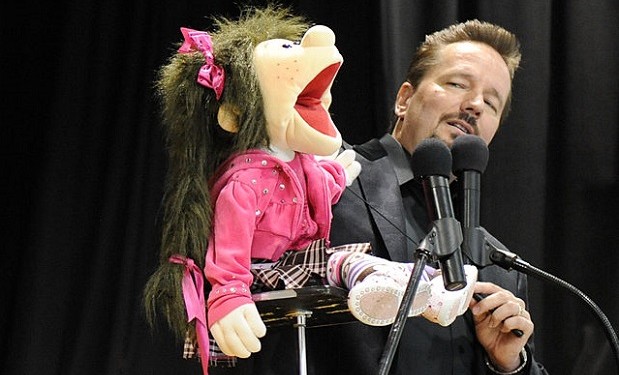 On The Bachelor, after Ben and JoJo tour the city of Las Vegas via helicopter, and Olivia continues to drive all the other women crazy, 12 bachelorettes learn a thing or two about performing on stage by comedian/ventriloquist Terry Fator. The 50-year-old from Dallas, Texas won Season 2 of America’s Got Talent. (The judges that year — 2007 — were Piers Morgan, Sharon Osbourne, and David Hasselhoff.) With $1 million in his pocket, he was signed as the headliner at The Mirage Hotel and Casino in Vegas.

It’s safe to say Fator is a big believer in love. He’s been married three times. After Fator won America’s Got Talent, his first wife Melinda left him. One day after his divorce was finalized, Fator married Taylor Makakoa, his on-stage assistant in Vegas. Their marriage lasted five years. Seven months after their divorce was finalized, while on stage singing “This Guy’s in Love With You,” Fator dropped to one knee and proposed to girlfriend Angie Fiore. They got married one month later in September 2015. The Bachelor airs Mondays at 8pm on ABC.