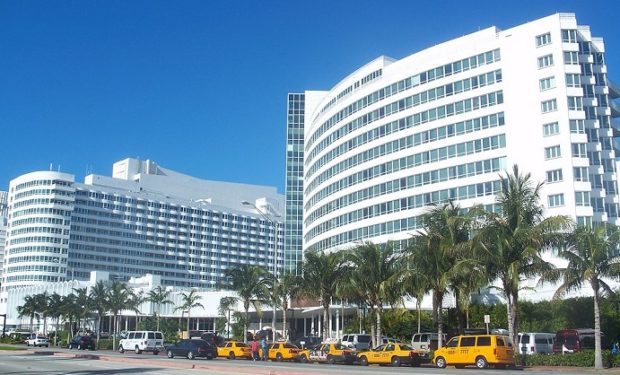 The Fontainebleau Hotel, By Ebyabe [GFDL or CC BY-SA 3.0 ], from Wikimedia Commons

Lifetime is premiering Beautiful & Twisted (January 31, 8pm), a movie based on the real life of millionaire Ben Novack, Jr. Heir to the Fontainebleau Hotel in Miami Beach, Novack married a stripper, Narcy, who was later found guilty of organizing the brutal murders of Ben and his mother Bernice. In the movie, Ben is played by Rob Lowe; Bernice is played by Candice Bergen; and Narcy is played by Paz Vega. See link below.

After the movie at 10pm, Lifetime is airing the documentary, Beyond the Headlines: The Novack Murders. Narcy was arrested in 2010, just one year after Ben Novack was found dead in a hotel room in Rye Brook, New York. He was bound with duct tape and his eyes were gouged out. Narcy is currently serving a life sentence at the Westchester County jail. She recently spoke by phone to the local media. During that brief call, Novack not only denies killing Ben, she questions if he is really dead.