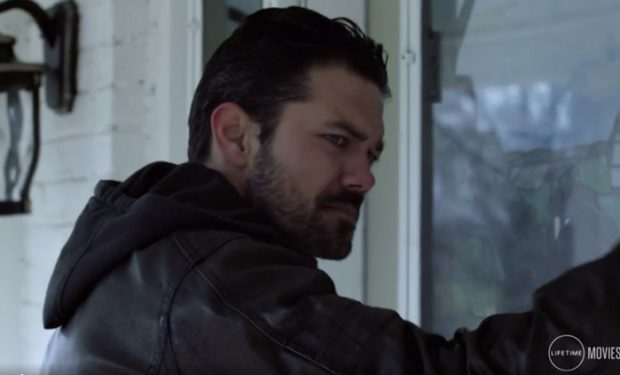 Ryan Paevey in "Locked In" on Lifetime Movies

The Lifetime movie Locked In is about a daughter Taylor (Kaleigh Rivera) and her agoraphobic mother Ann Marie (Josie Davis) who let a stranger into their family farm house during a dangerous storm. Unbeknownst to them, the stranger, Draven, has escaped from prison and is seeking out stolen money that is stashed somewhere on the farm.

Draven is portrayed by Ryan Paevey. The former model is known for his role as Detective Nathan West on General Hospital, his lead role in the Hallmark Channel movie Unleashing Mr. Darcy (he played rude dog show judge Mr. Darcy), and for playing one of Christina Aguilera‘s love interests in her 2012 music video “Your Body” which has been viewed more than 172 million times (see below). Paevey most recently appeared on Battle of the Network Stars where he competed against Lou Ferrigno aka The Hulk (photo below). Locked In premieres on Lifetime on August 19 at 8pm.

Gotta say, it was awesome to spend the day with one of my lifelong fitness inspirations #louferrigno …catch an epic competition tomorrow at 9/8 central on ABC @networkstarsabc , team TV Cops! @generalhospitalabc