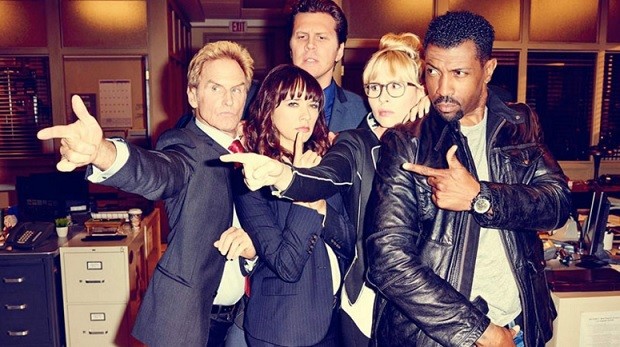 The new TV comedy Angie Tribeca is a spoof on all police procedural shows like Law & Order. Tribeca is an LAPD detective portrayed by Rashida Jones. She heads the department’s elite RHCU (Really Heinous Crimes Unit) which is composed of some memorable characters including Jay Geils, Chet Atkins, and DJ Tanner. The show is produced by The Office‘s real-life married couple, Steve and Nancy Carell.

DJ Tanner is portrayed by Deon Cole. The 44-year-old from Chicago is best known for his roles on Black-ish (Charlie Telphy) and in the Barbershop movies (Customer Dante). And Cole has appeared (and was a writer for) The Tonight Show with Conan O’Brien and Conan. Note: Cole does not do his own stunts on the show (see below). Angie Tribeca will premiere on January 17 beginning at 9pm on TBS. It’s a 24-hour marathon!